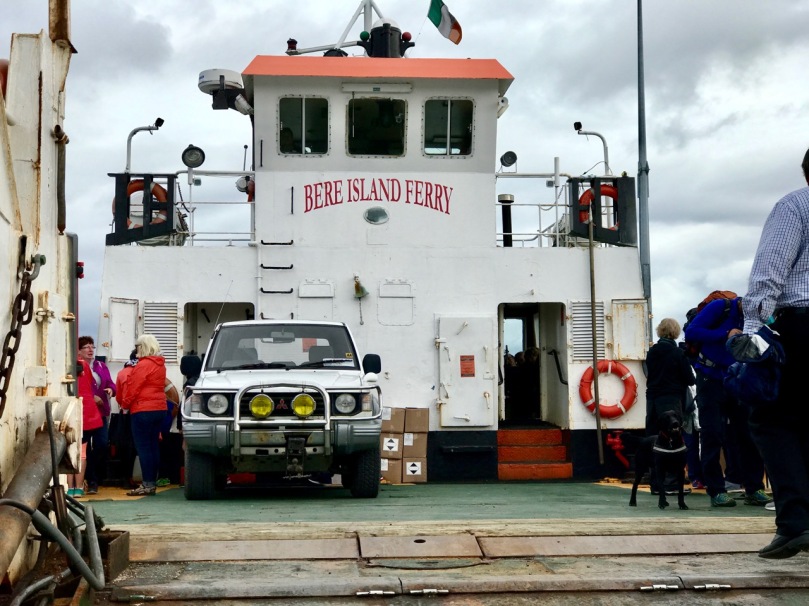 As part of the excellent Taste of West Cork food festival, we signed up for the Bere Island Cultural Taste Tour, and on a grey Saturday morning we drove off along the south side of the Beara Peninsula to Castletownbere. The Islands of West Cork are all fascinating to explore, in our experience, and each one is very different. This was my first visit to Bere Island, and I immediately want to go back there: this was, of necessity, a ‘whistlestop tour’, ably led by Ted O’Sullivan, probably a direct descendant of the famed O’Sullivan Bere (who deserves – and will get – a post of his own!) You may remember that the island – and the peninsula – has taken its name from the Spanish wife of Owen Mór, King of Ireland around 120AD. 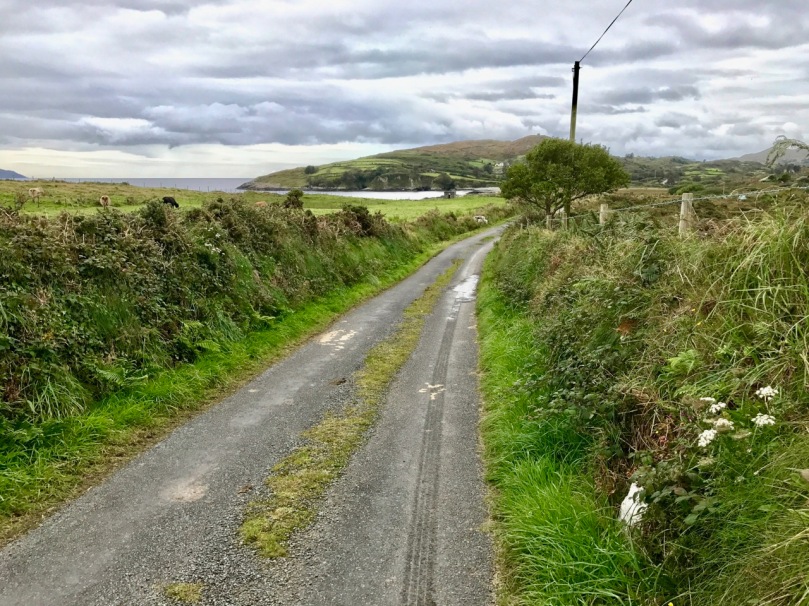 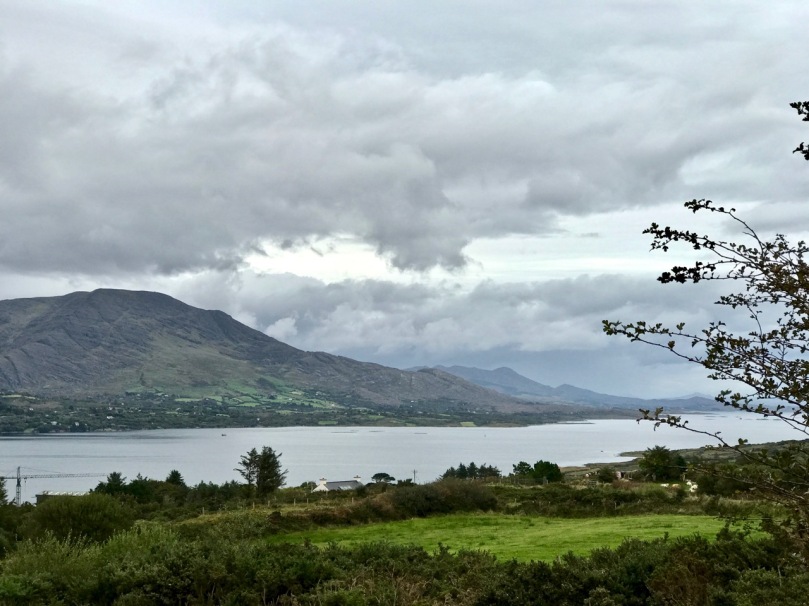 Bere Island lies off the coast of the Beara Peninsula, which was in constant view as our bus took us to the eastern end on the narrow island roads – towards the ‘Red Line’

While the history of the island takes us back to the Bronze Age and beyond, more recent events have been left behind on the landscape – and in the memories of the islanders. 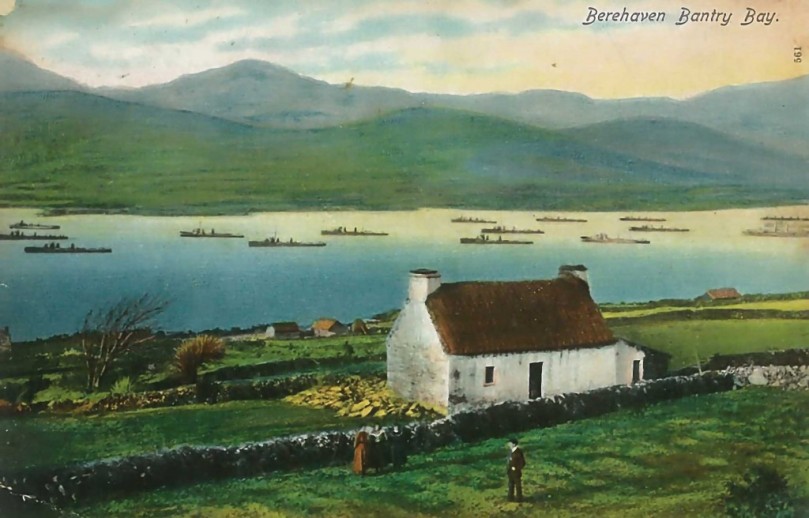 Upper – ancient history: Ardaragh Bronze Age wedge tomb beside the road to the east of the island with Hungry Hill beyond. In 1926 the tomb collapsed, and this was seen by some islanders as a ‘sign’ that the British might leave the occupied part of the island. Lower – modern history: looking from the island towards the Beara – British warships stationed in the bay circa 1914

Did you know that part of Bere Island remained in British hands well beyond the establishment of the Irish Free State in 1921? This was one of the three Treaty Ports that were retained by the United Kingdom following the First World War, when there were fears that there might be a recurring naval threat to the islands of Britain and Ireland. The other two ports were Spike Island, in Cork Harbour, and Lough Swilly in the far north of the Irish state. Relationships between Ireland and Britain remained uneasy for many years but finally, in 1938, it was agreed that these deepwater ports should be handed over to the Irish Republic. Winston Churchill was appalled by the decision, and in an address to Parliament in that year he called it a ‘folly’:

…When the Irish Treaty was being shaped in 1922 I was instructed by the Cabinet to prepare that part of the Agreement which dealt with strategic reservations. I negotiated with Mr Michael Collins, and I was advised by Admiral Beatty who assured me that without the use of these ports it would be very difficult, perhaps almost impossible, to feed this Island in time of war. Queenstown and Berehaven shelter the flotillas which keep clear the approaches to the Bristol and English Channels, and Lough Swilly is the base from which the access to the Mersey and the Clyde is covered… These ports are, in fact, the sentinel towers of the western approaches, by which the 45,000,000 people in this Island so enormously depend on foreign food for their daily bread, and by which they can carry on their trade, which is equally important to their existence… 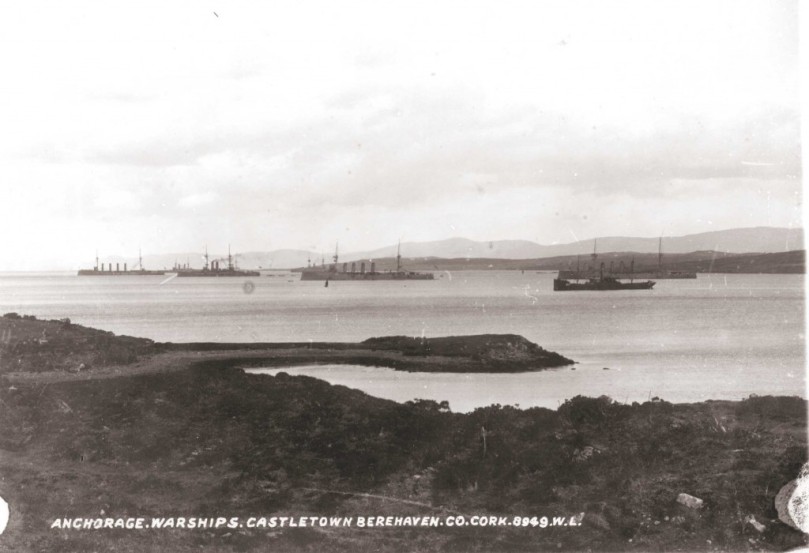 Until the handover in 1938 the eastern end of the island lay beyond ‘The Red Line’. The position of this line was pointed out to us on the tour, although we couldn’t see a ‘line’. In fact, no physical line did ever exist but there was a point beyond which Irish people could not proceed, and British forces stationed over the ‘line’ could not cross. Ted, our tour guide, recounted some amusing stories of those strange times. With typical Irish inventiveness, there were many instances of how the difficulties created by the ‘line’ were overcome. For a short while there was a prison on the British sector, right beside the ‘line’. It was used to incarcerate mainly political prisoners. Every weekend there would be a party held on the Irish side of the line which always included singing, dancing and drinking, and the prisoners joined in! Many politically important prisoners managed to escape, and the prison was known as a ‘leaky bucket’ because of this. A number of the British governors of the prison were removed during its short life because of their inability to contain their charges. 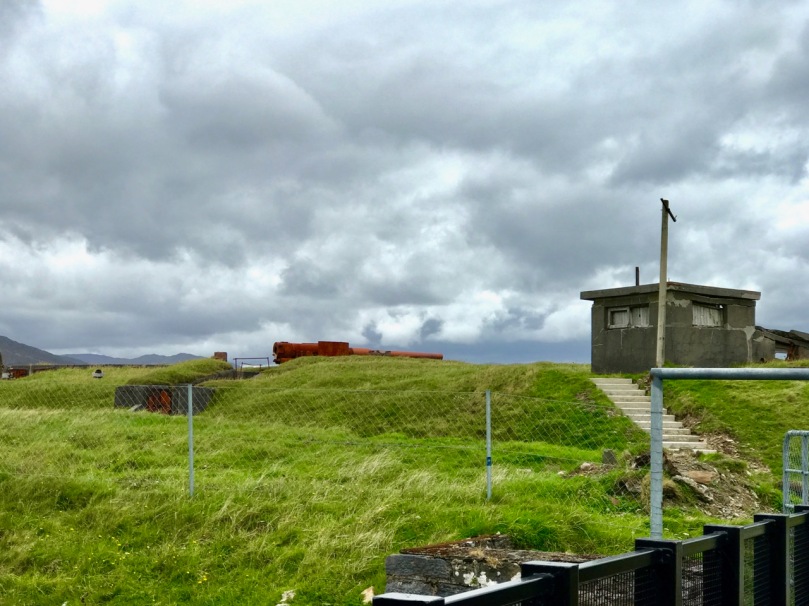 Lonehort Battery – built in 1899 by the Royal Engineers of the English army – housed two enormous 6-inch guns (still in place but very rusty) and is surrounded by a deep moat. There are plans to re-open the site as a historic monument

Lonehort is a natural harbour, believed to have been used by the Vikings. Archaeological excavations were carried out there in 1995 and confirmed the artificial breakwater as being Norse: there were also signs of a Viking shipyard here. 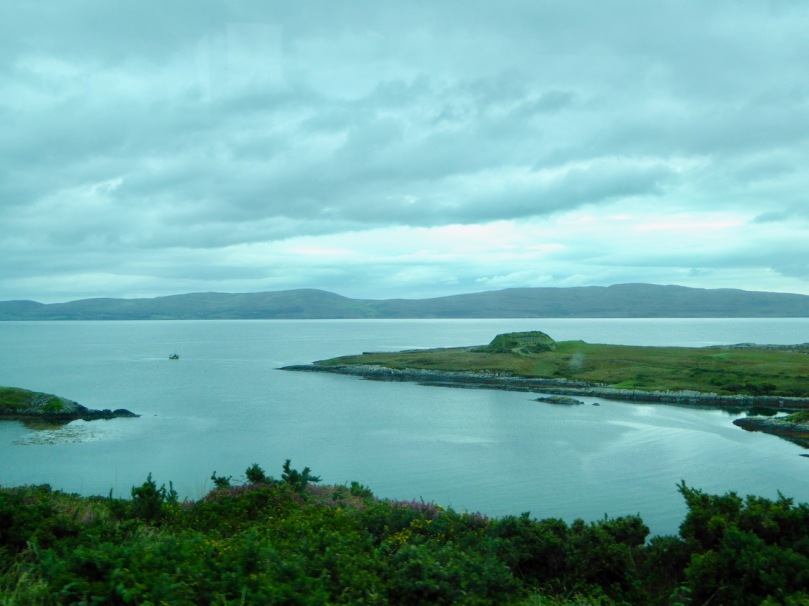 Lonehort – a Viking harbour and shipyard. The word means ‘Long Phort’, and is used to indicate Norse associations

One of the purposes of our tour was to introduce us to food produced on the island, and we ate in three establishments: The Shop and Cafe in Rerrin for soup, The Hotel for a fishcake lunch, and the Heritage Centre for a dessert and coffee. All provided good, delicious fare. 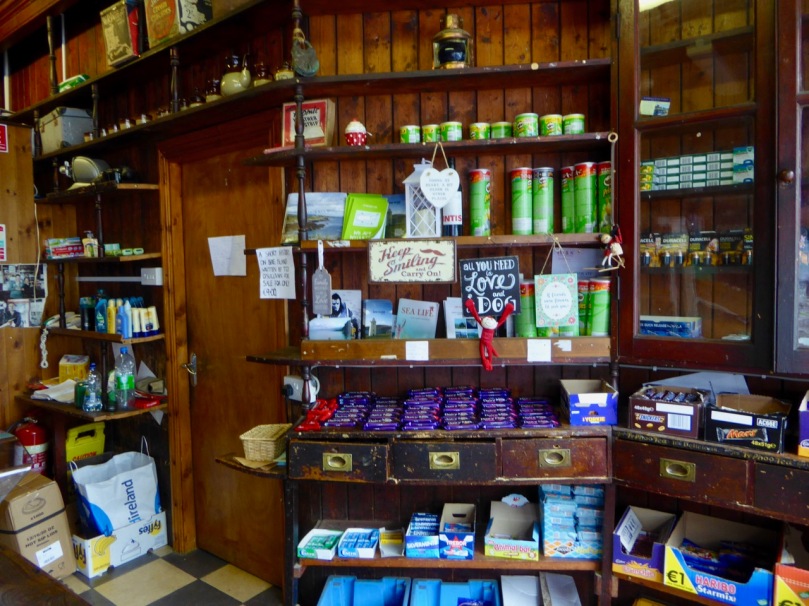 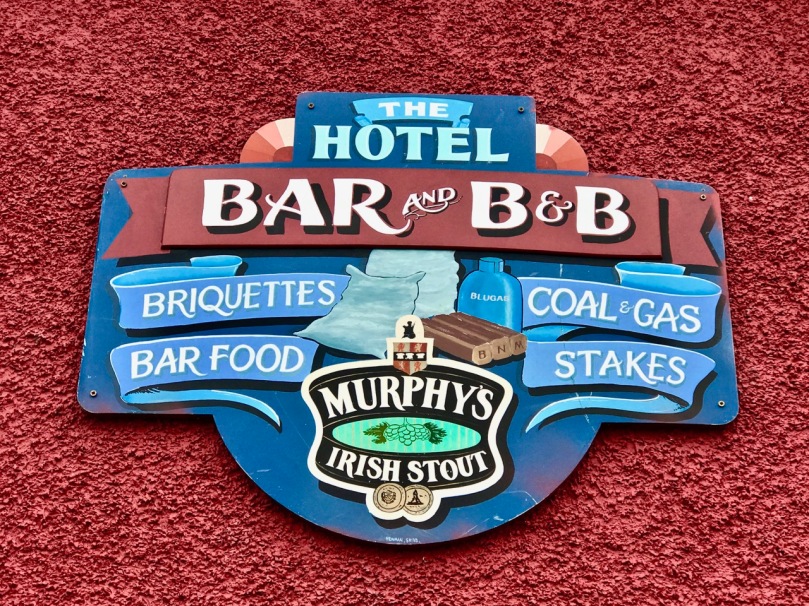 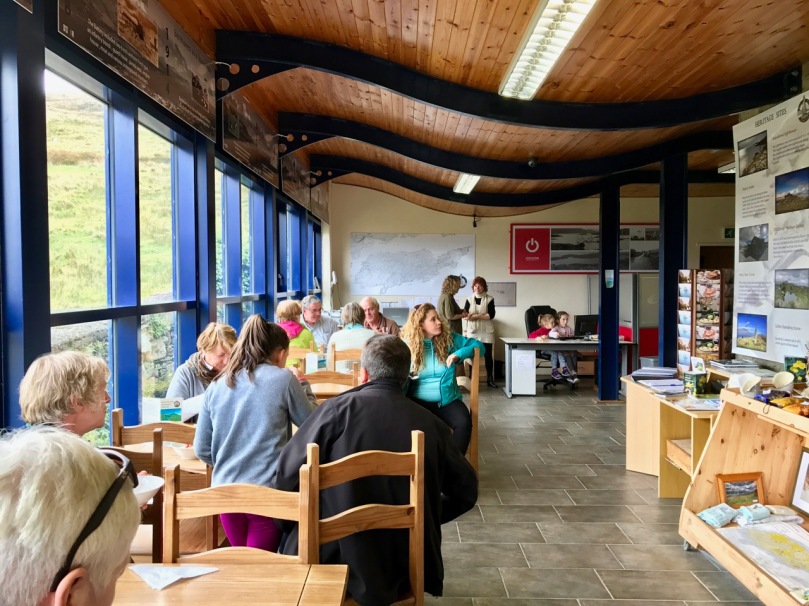 Our three food destinations. Top – the wonderful Shop at Rerrin; centre – The Hotel, open all year round (it looks as though it has interesting fare!) and lower – the modern Heritage Centre which has a gallery displaying the island’s history and culture as well as a good eatery

All too soon our short tour came to an end: we had to get back to catch the ferry. We missed several things: St Michael’s Holy Well and Church; views from Knockanallig (the highest point) and several standing stones including Gallán, which is exactly in the centre of the island. And it’s a great place for walking! We will return, perhaps for a few days in the winter, and complete our explorations. But many thanks to Ted and the Bere Island Projects Group for giving us such a comprehensive introduction to an intriguing community and its history.

Robert heading home after a grand day out! 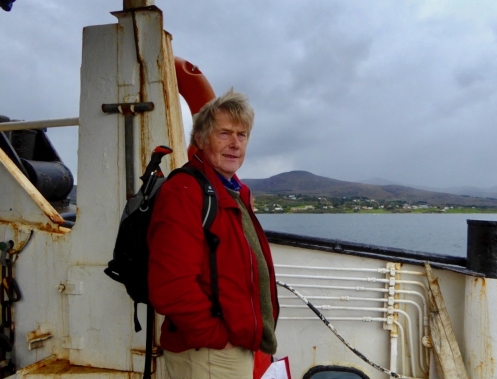