Kilcoe Castle has been wonderfully restored and conserved by Jeremy Irons. His work allows us to see what a 15th century castle would have looked like in the landscape and has saved a precious piece of our heritage. This is important as there are so few castles that have been conserved here and lots that have disappeared or are in danger of doing so. Before you read on you might like to refresh your understanding of our West Cork castles, or Tower Houses, by reading When is a Castle?; Tower House Tutorial, Part 1; Tower House Tutorial, Part 2; or Illustrating the Tower House: A Guest Blog (sort of).

First of all, let’s address the issue of the colour of the exterior lime render, since this has been controversial. In fact, the only reason it’s been criticised is that people are not used to seeing castles as they originally stood, since the lime render has long ago disappeared from them, leaving the familiar bare stone walls that people have assumed was how they looked from the start. But all castles were rendered – without that they would have been porous and running with water inside and out. 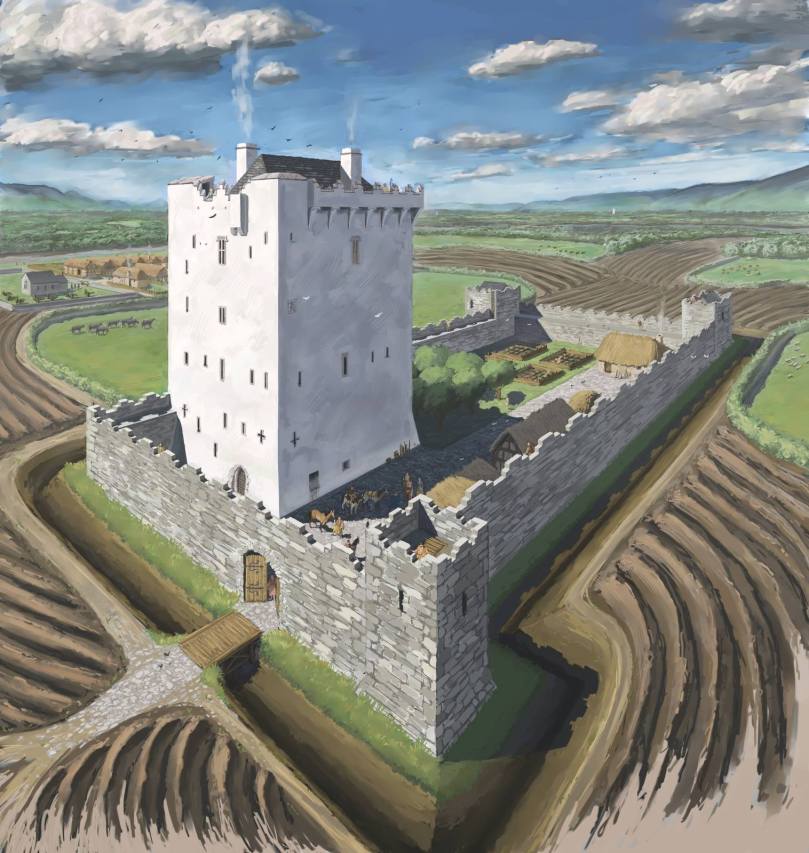 This is JG O’Donoghue’s reconstruction drawing (used with permission) of what a fifteenth century tower house would have looked like. It was based on Kilcrea Castle. Note the white render and note also that another white castle can be seen in the distance

And the render was coloured! There is evidence of all kinds of additions that would have added colour, including animal fats, blood and hair, flour, shell, sand and stone rubble. The plasterer had his formula and also used what was available locally, materials that would increase cohesion and improve drying time. Irish places names abound in references to coloured castles – just Google the words “castle Ireland” and then put white, black, red, green in front of it and see how many there are. Or look for Irish equivalents, such as Castlederg – for Caisleán Dearg, meaning Red Castle. There’s even a Castleboy in Meath that comes from Caisleán Buí, meaning yellow castle. So the choice of colour was not idiosyncratic or random but well grounded in historical precedents. The render was essential to keep the castle dry and will have to be renewed occasionally as it does eventually wash away – which is why very few examples have survived from the fifteenth century. 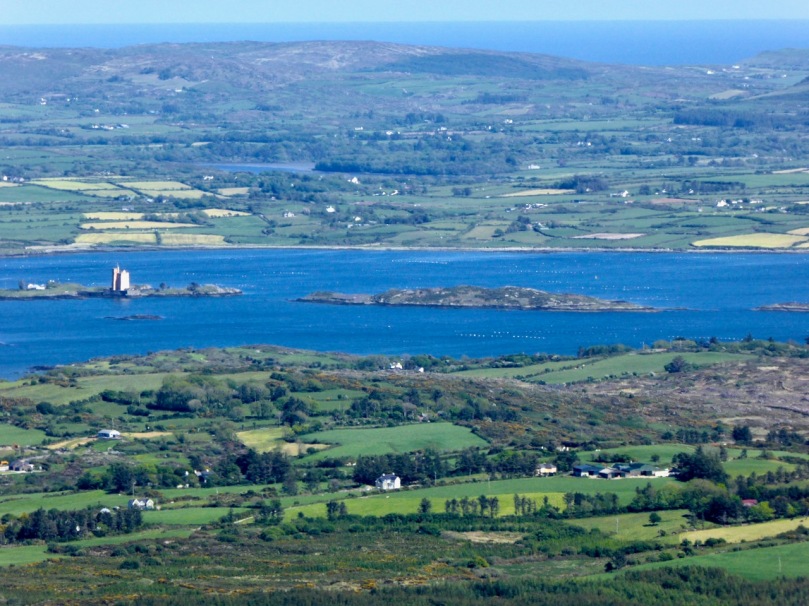 The other reason to include colouring elements in the render was to make the castle stand out in the landscape. These were statement residences and the statement was one of power and prestige. They were meant to be seen from a long way off so that nobody could be in any doubt who was the most important person in the neighbourhood. In West Cork, they were also meant to be seen from other castles – those built either by members of the same or another family (the McCarthys, O’Mahonys, O’Driscolls, O’Sullivans or O’Donovans). Kilcoe was a McCarthy castle: the McCarthys were the overlords of all the West Cork clans and this castle was inserted right into the middle of territory controlled by the O’Mahony’s and the O’Driscolls as a constant reminder of the hierarchy. Accordingly, Kilcoe is the largest castle in Roaringwater Bay and has a unique design that incorporates an additional corner tower, distinguishing it from all the other castes around it. There is only one other West Cork castle of the same design – Dunmanus Castle on Dunmanus Bay, a castle of the O’Mahonys.

It was also important that castles could be seen from the water, because control of the fisheries was what gave the great West Cork families their vast wealth. Salted herring and pilchards were staples of the European diet in the Middle Ages because there were so many fasting days on which eating of meat was forbidden and because fresh food wasn’t always readily available in the winter. The O’Mahonys and O’Driscolls catered to the huge fleets of Spanish, French, Portuguese and British fishing boats that plied the waters of Roaringwater Bay, providing, for hefty fees, permission to fish in ‘their’ waters, fish processing facilities and salt in several ‘fish palaces’ along the shore, fresh water, and taverns with fine wines and (sorry) accommodating women. The McCarthy’s must have been involved in this lucrative trade too, but it is also likely that their objective in building Kilcoe was to keep an eye on the the ‘take’ so that they could extract, as befitted those at the top of the food chain, their due share from those who owed them submission and therefore were obligated to yield up hefty donations on a yearly basis. 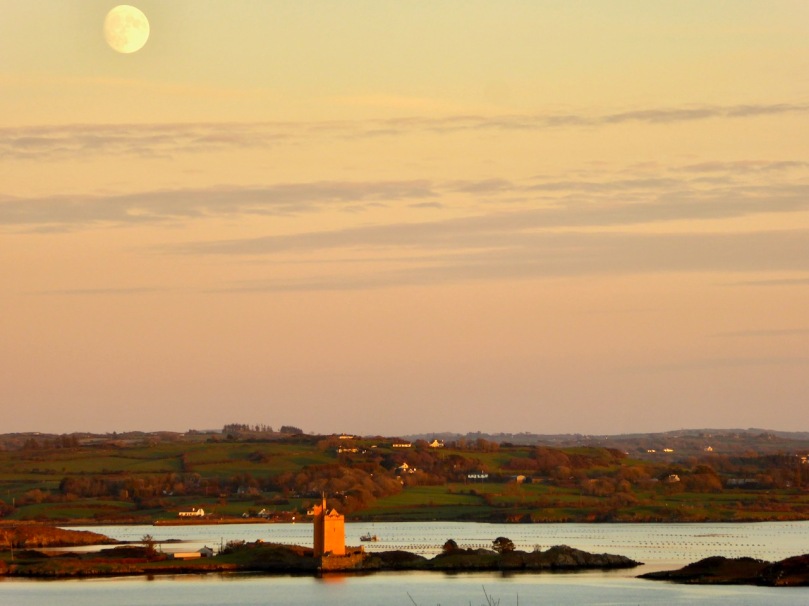 Castles such as Kilcoe were heavily fortified. Mostly the inhabitants were worried about incursions by other Irish families. It was not until after the Battle of Kinsale in 1601 that the forces of the British Crown came to lay siege to Kilcoe. Thanks to its defensive features and siting Kilcoe was able to hold out longer than any other West Cork castle. The McCarthys abandoned it after Kinsale but an O’Driscoll held on until finally surrendering in 1603. What were the features of this castle that allowed it to resist so successfully?

Fist of all, it was sited on a small island. Like a few other West Cork castles, it was connected by a causeway that could be destroyed at will, cutting off access to the castle. It was surrounded by a strong bawn wall, which is clearly visible now as it has been reconstructed. The wall was punctured by arrow loops and had a wall walk at the top where crenellations provided cover for archers. The roof of the tower also had a wall walk and crenellations – in this case they took the form of what became known as Irish Crenellations. These were stepped or ‘toothed’ battlements, with tall parts (merlons) behind which defenders could take cover and shorter parts (crenels) for shooting from. The crenellations have been expertly reconstructed as part of the restoration of the castle.

Heavy ordinance such as cannons were not yet staples of siege warfare in Ireland – it was Cromwell who unleashed their destructive force half a century later. When the castle finally surrendered, it was intact. Over the years, of course, it fell into disrepair and finally into ruin. It was shored up and some work was done by the Samuels family, but when they sold it to Jeremy Irons the restoration program got underway.

This is a private home and I have never been inside it. But if you are curious you can see lots of interior photographs here: https://jeremyirons.net/category/kilcoe-castle/. My objective in this post has been to emphasise the importance of the restoration of this magnificent tower house so that it will be a highlight of West Cork heritage for generations to come, as well as to acknowledge the solid research that went into the reconstruction program, resulting in a spectacular structure that is a superb and historically-accurate addition to our West Cork landscape. Thank you, Jeremy Irons and your team, from all of us in West Cork.