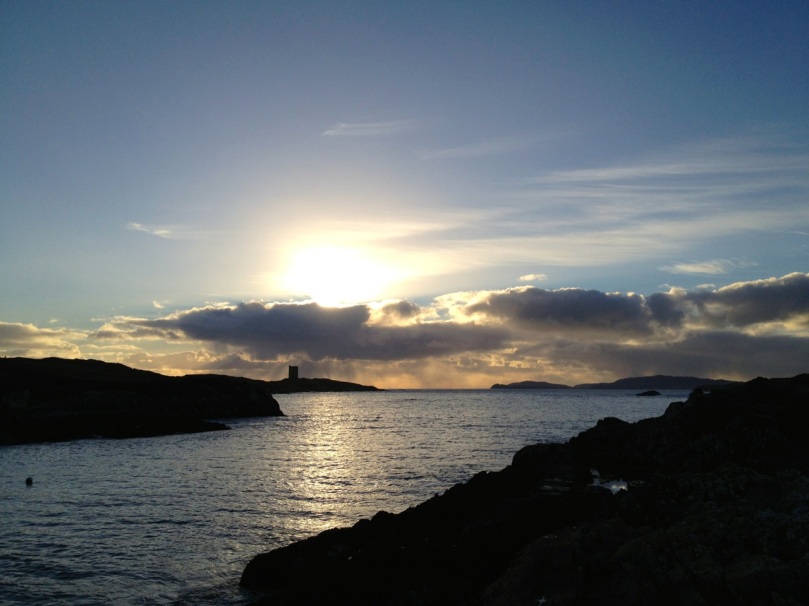 A little while ago I described an outing we undertook exploring some of the archaeological sites on the Mizen Peninsula. We were out again a few days ago checking on some monuments off to the west of us. I had researched the Archaeological Survey Database, and determined to have a look at the ‘Fish Palace’ located in the townland of Leenane, close to Crookhaven – evidently a substantial establishment set up by Sir William Hull and his business partner, Sir Richard Boyle, first Earl of Cork, in 1616.

Hull was a notorious character – his family home was Larkbeare, near Exeter in Devon. He had been appointed Deputy Vice Admiral of Munster in 1609 under James I, and settled in Leamcon near Black Castle or ‘The Hound’s Leap’, one of the O’Mahony castles built along the coast of Roaringwater Bay. Set on a promontory into Toormore Bay, Leamcon  is one of the most defensible of these, only being reached by crossing a narrow bridge. Hull’s job was ostensibly to protect the southern Irish coastline against piracy. In fact, the post seemed to encourage collaboration with the pirates, where it would financially benefit both the Admiralty and Hull himself.

You probably want to know what a ‘Fish Palace’ is? I had seen the term on Irish Ordnance Survey maps, and had established that it is a class of monument in the Archaeological Inventory of County Cork 1992, where it is well described:

‘…Fish palaces: The fishing and curing (smoking, pickling and pressing) of pilchards (Sardinia pilchardis) became an important industry in West Cork during the 17th century. This industry suffered from the erratic pattern of pilchard shoals (some years none would appear in Irish waters) and was in serious decline by the middle of the 18th century. Today, all that remains are the ruins of curing stations, called “pallices” along the coast. The word “palace” is of uncertain derivation, but probably originated in the SW of England where it meant a cellar used for storing fish. Usually the “press wall” is the only standing structure, with its horizontal line of lintelled support niches. These held one end of a press beam; at the other end a heavy weight was suspended and in the middle was a wooden press or “buckler”. The buckler was placed over an open barrel of pilchards and the downward force of the press beam pressed the pilchards into the barrel. Also fish or “train” oil was squeezed out through a drain in the base of the barrel; this was valuable as a luminant and was used by the tanning industry…’ 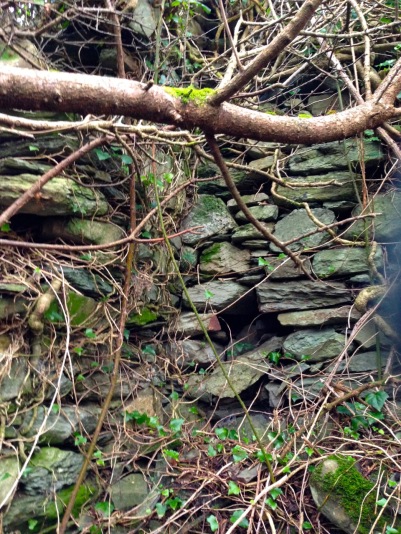 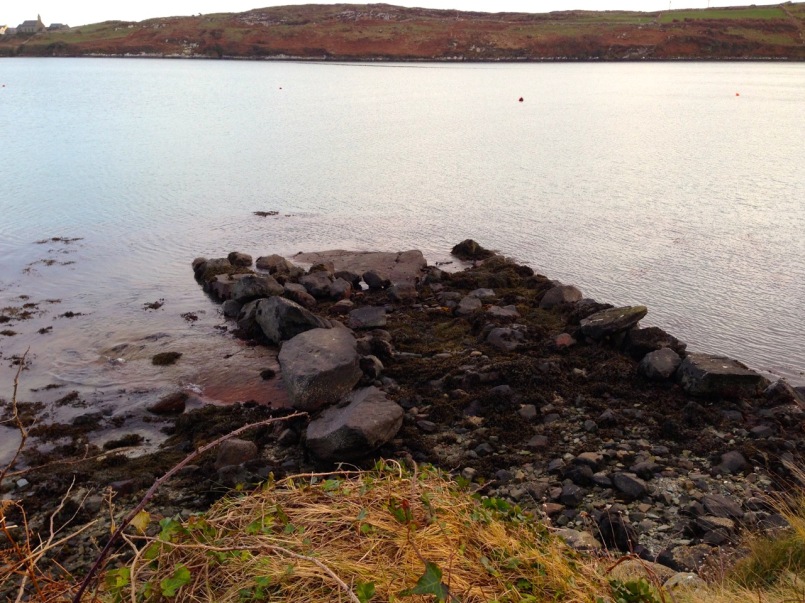 All this has been ringing bells with me: firstly, because I know from the map that a Fish Palace once existed down below Nead an Iolair – overlooking Rossbrin Cove and Castle – but no trace is left now, except that the field there is still known as ‘The Palliashes’; but secondly because when I lived in Newlyn in Cornwall I looked out over Mounts Bay, where a pilchard fishery had been active since the 16th century. This was a huge business, whose heyday was the middle of the 19th century. Pilchard quantities are measured in ‘hogsheads’ – one hogshead holding 3,000 fish: in 1847 the exports of pilchards from Cornwall amounted to 40,883 hogsheads or 122 million fish! By good fortune we have a pictorial record of the activities, as two of the Newlyn School of Artists chose seining as the subject matter for two impressive paintings. 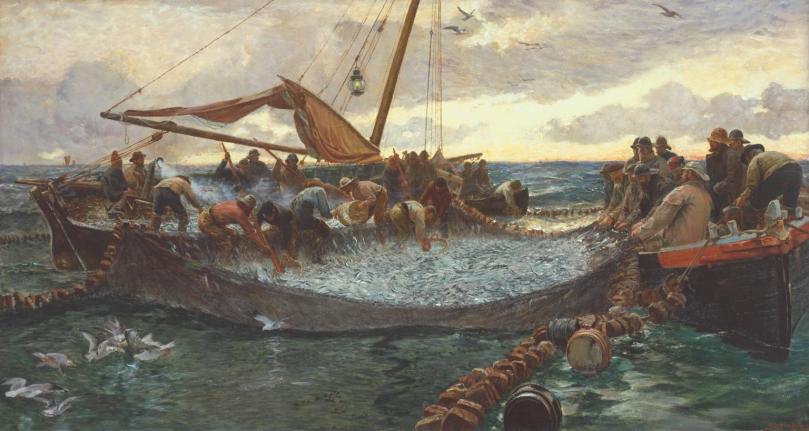 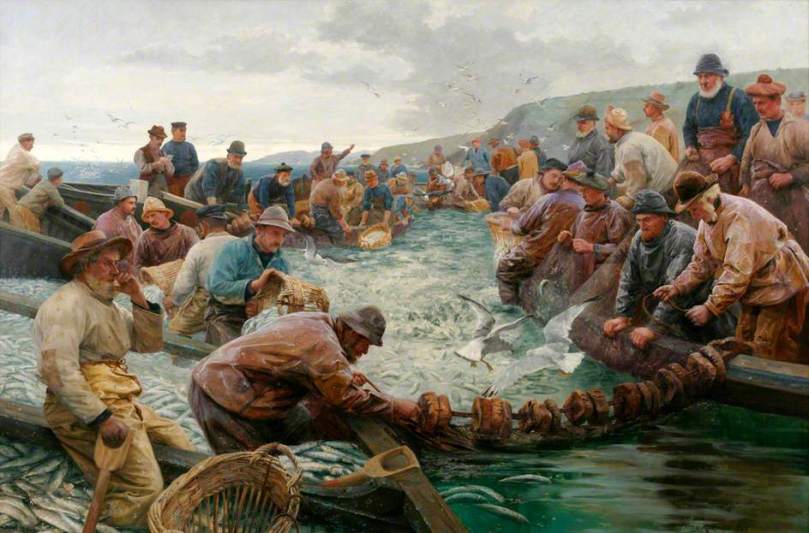 In the good times Mounts Bay was brimming with seine boats. The pilchards were harvested during the summer when the shoals swam in close to the shore. Lookouts known as Huers were posted on the cliffs, from where the shoals could be seen and semaphore signals were sent out to the waiting boats who let out 400 yard long nets to surround and trap them. The nets were kept upright by floats at the surface and weights at the bottom, presenting an impenetrable wall to the pilchards. The pilchards were then removed by smaller tuck nets and loaded into punts and carried ashore. The seine net provided a convenient keep net in which the fish could be kept alive and fresh until they were processed. 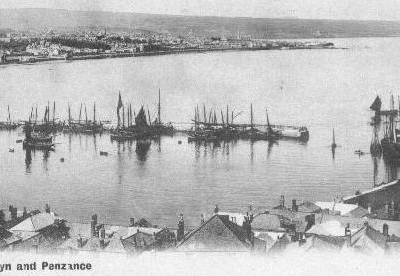 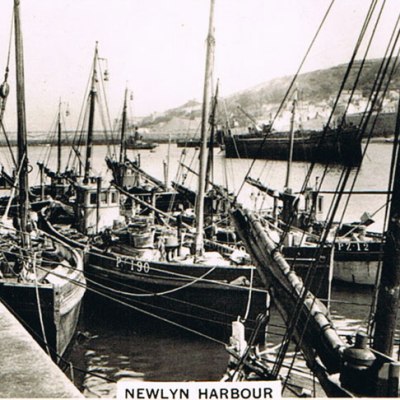 Early photographs of seining, and the fishing fleets working out of Penzanace and Newlyn, Cornwall

During my time in Newlyn there was an active pilchard processing plant – now closed down – but I was fortunate enough to visit the works and see the pressing and preserving taking place, using exactly the same methods that William Hull’s workers employed four centuries before. Just as in those earlier times the main markets for the processed fish were in France and Spain. 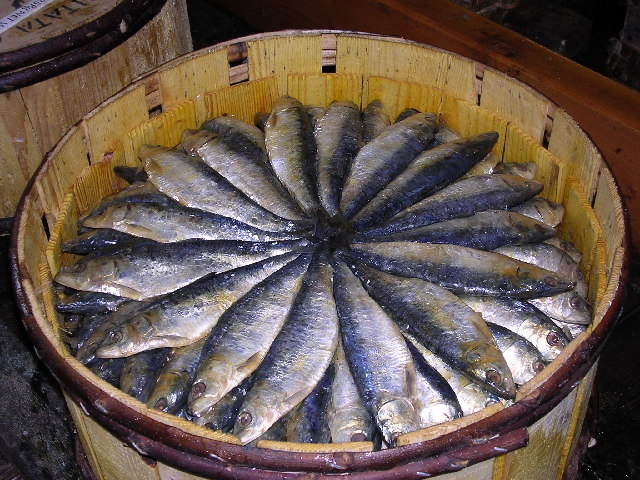 As in Ireland, the pilchard shoals severely declined – probably because of overfishing – and the industry followed. Nowadays there is a small amount of pilchard fishing taking place in Cornwall, but it is barely viable. 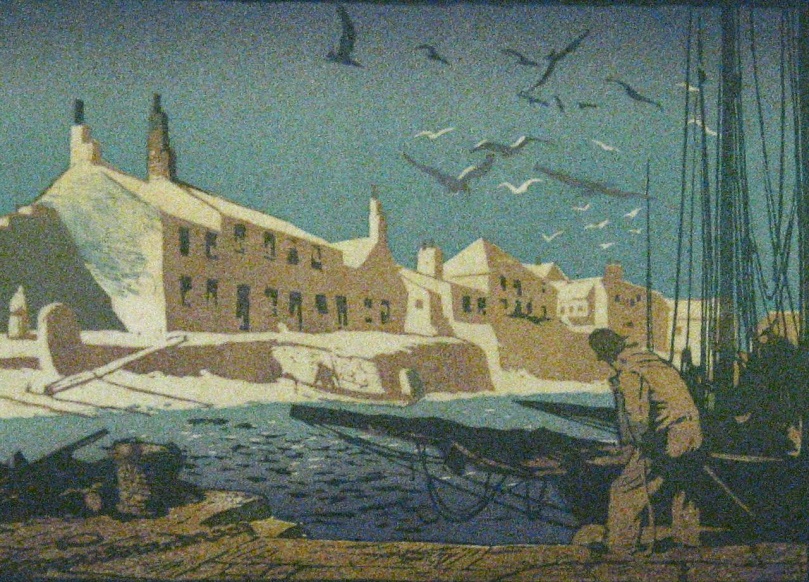 To the casual observer, our little expedition to the Crookhaven Fish Palace might have seemed pointless – a lot of scrambling through bracken and brambles to find a few old stone walls and the crumbling remains of an abandoned quay. Through our eyes, however, we saw the industry and energy of former days: Irish men and women labouring long and hard to put clothes on the back of a Knight and an Earl…