According to the forecast today could be the last fine day of 2014, so we decided to make the most of it and set off on a mission. And what a day it was! Cold, yes, but with that brilliant light that only happens on crisp winter days.

Our mission? it was to find a piece of prehistoric rock art I had last visited over 40 years ago in the townland of Castlemehigan, near the end of the Mizen Peninsula. But once in the vicinity of Castlemehigan we couldn’t resist continuing to the end of the tiny road, which climbed up the rocky hills on the northern side of Crook Haven. Parking the car, we climbed to the highest point we could find. We’re used, by now, to the jaw-dropping views around here, but even by Mizen standards, this was something special. 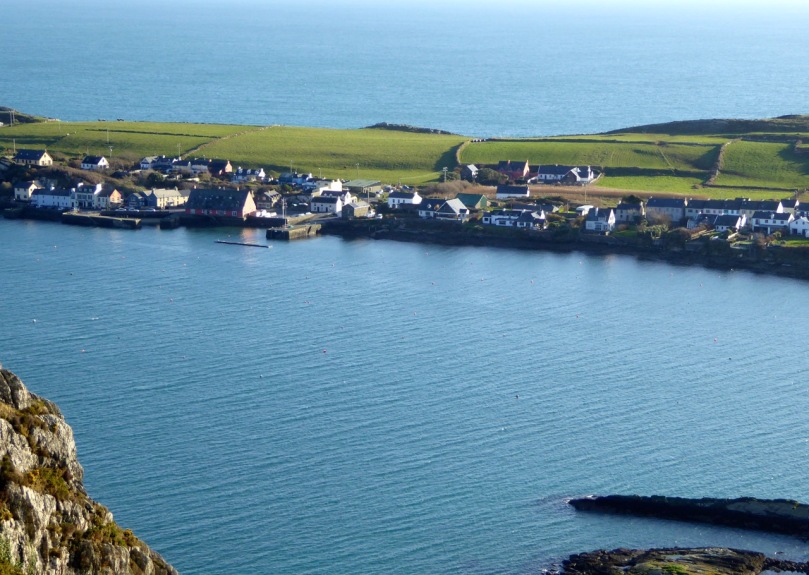 South of us, across the Haven was the village of Crookhaven nestled in its protective harbour. Looking north we could see across the Sheep’s Head to where the unmistakeable outline of Hungry Hill loomed on the Beara Peninsula. To the west was the White Strand and Brow Head, crowned by the historic Marconi telegraph station and to the east was the whole of Roaringwater Bay: Cape Clear Island, Sherkin, Baltimore, and the ring of hills that run down to the water.

Top of the world

Back in the vicinity of the rock we knocked on the door of a farmhouse to ask directions and permission. Often when we do this we are met with a blank look – not every ancient monument location has survived in the folk memory of the local residents. But this time we hit it lucky, with Florence O’Driscoll – ah yes, he knew it – the mass rock is what we were looking for. I showed him a picture of the rock and he confirmed that was the one, it was on his land and he would take us there.

My write-up and drawing of the time brought back some memories of an unusual rock with very large depressions, almost more basins than cupmarks. I also had a very clear recollection of being taken to the site by Bernard O’Regan, a local (and well-remembered) amateur archaeologist who was very helpful to me at the time. Because the rock was very overgrown, he had arranged to have it cleaned for me and when we arrived there were two men on top of the rock hacking away the gorse and heather. Nowadays, rock art specialists abide by an ethic of zero surface contact – no clearing or scrubbing allowed! 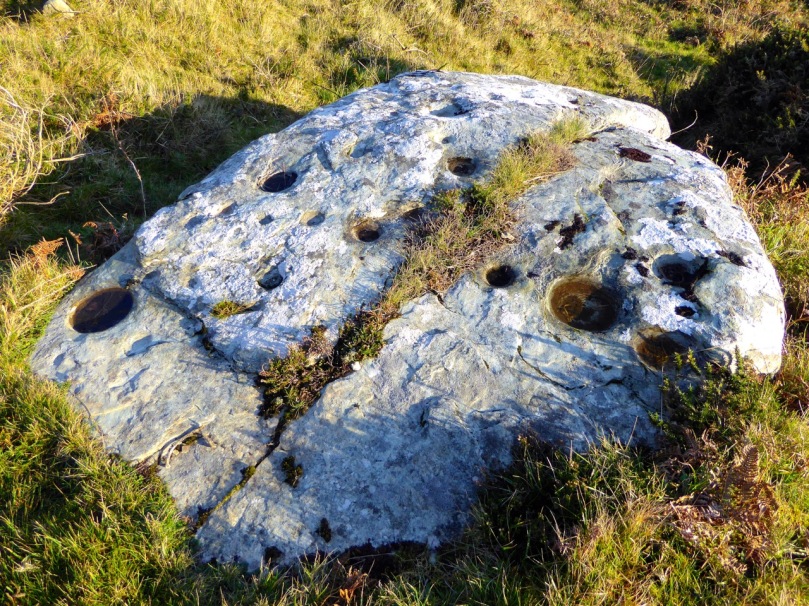 Although this rock lacks any of the circles, grooves and lines that add interest and appeal to many panels of rock art, it is special in other ways. Several of the cupmarks are unusually large, and one is basin-shaped (that is, with straight sides and a flat bottom).

Some cupmarks appear to run in rows and the rows run in specific directions – one line of cupmarks run directly east/west pointing at the lake that lies about 100 meters away at the bottom of the field. Another line pointed to Mount Gabriel, about 15 kms away on the distant horizon. The two large basin-like depressions are directly north/south of each other.

What could be a standing stone is located a few metres away.

In comparing my original drawing, done 42 years ago, there wasn’t much I would change. Some cupmarks appear to have pecked areas between them which conjoin them in a dumb-bell motif. My original decision was that there were two dumb-bells, but perhaps now I would be tempted to say there were three or even four. However, this just illustrates the subjective nature of the recording process. Especially where lichen obscures the surface, decisions like this come down to professional judgement and experience: drawings can differ from one recorder to another, or even from one visit to another when lighting conditions show up more or less of the carving detail. 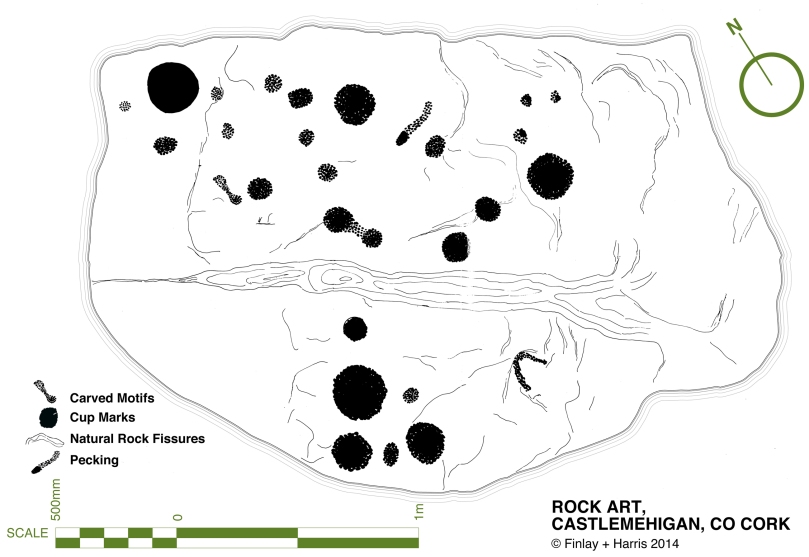 This earthfast boulder is a beautiful object – not least because of its setting. I love these Mizen landscapes – they have a very particular character. Large areas of rock outcrop are interspersed with the tiniest fields, tracks and bog. Here there are lakes close by – once natural features, they have been turned into reservoirs to serve local communities. The marked rock overlooks one of these – this one supplying nearby Goleen.

This example reminds me in some ways of the Derreennaclogh rock – it’s of similar size and shape. Also, at Derreennaclogh Mount Gabriel is prominent on the western horizon, and we’ve been told that the setting sun towards the short end of the year appears to ‘roll’ down the slope of the hill at times. At Castlemehigan the rock also looks out to Mount Gabriel – this time to the east. This is a relatively isolated piece of rock art: the nearest recorded example is at Cooradarrigan, on the far side of Schull. It’s tempting to think that the flat, table-like surfaces of both Derreennaclogh and Castlemehigan were considered significant to those ancient people – who made them notable by marking them – because of their settings which relate to unmistakable landscape features. Otherwise, one might question why large areas of flat rock surface in the immediate vicinities – ideal for carving – have apparently been left untouched.

Florence O’Driscoll, our guide on this expedition, proved to be a fund of information. He had farmed the land which had been his father’s before him. Finola must have met his father when she explored the rocks over forty years ago. Florence carried the stories of the rock from his father’s generation, and probably from generations before that. He told us that the rock had been used as a mass rock in penal times – and that the hill above it was known as Cnocan an Aifreann (the hill of the mass): there is what certainly appears to be a cross carved into the rock surface, close to the large basin (Finola did not record this in her original drawing – she will add it when we update the records). Florence told of the time that the ‘Tans’ (the Black-and-Tans) caught red-handed the Priest celebrating the mass: the Priest threw the crucifix into the lake below the rock (the lake was then smaller than it is now). Ever since then, says Florence, the lake has never run dry – and never will.

Look for the possible cross carving on the right

It’s interesting that stories carried through local tradition pay no heed to time or history. They don’t need to: the ‘story’ is a part of the rock, as much as the carvings are. Florence told the tales as if they had happened yesterday. I hope they will continue to be told as long as the rock continues to display its enigmas. 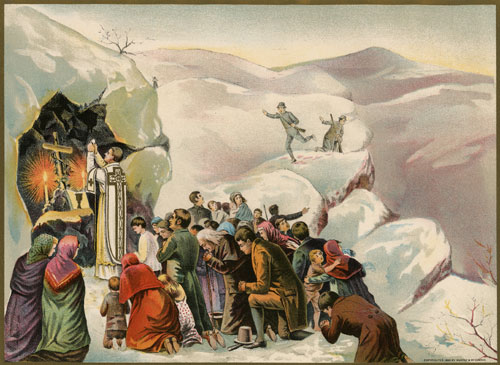 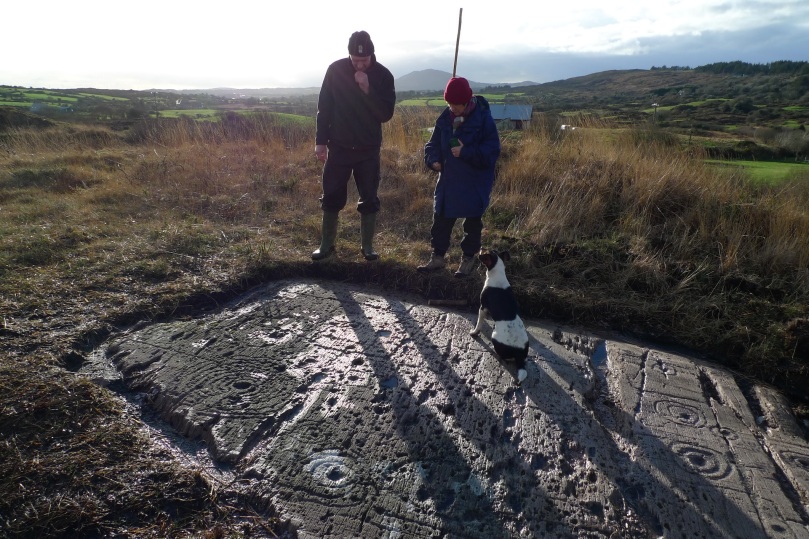 We went to look at an exciting new Rock Art discovery, in the hills between Ballydehob and Bantry: wild country. The man who uncovered it – Gary Cox – lives close by, and became familiar with the terrain through walking his dogs over the land every day. He noticed in passing a small piece of exposed rock, just a few centimetres square, on which it was possible to make out a couple of curved lines. Intrigued, he began to carefully pull back the moss and gorse to expose a secret which had lain hidden from view for hundreds – perhaps thousands – of years. 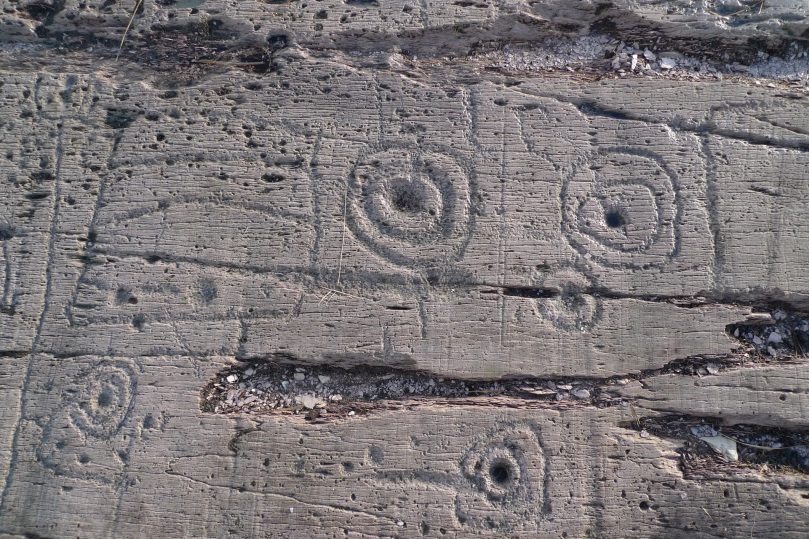 The Derreennaclogh panel is one of the finest and most intriguing pieces of Rock Art that we have seen in West Cork. Because the surface has (until now) been largely protected from direct contact with the weather, the carvings are pristinely visible, especially on a good bright day. On the rocks at Ballybane West – just over the hill – the designs are so weathered that you can go there day after day and never make them out, unless the shadows from a low sun are just right.

Details from the Derreenaclogh motifs

Current thinking suggests that all the Rock Art in ireland is Bronze Age – between four and five thousand years old: it’s breathtaking to think that we are looking at such ancient depictions of …. what? There’s the enigma: we have no idea – there are cup marks, circles, lines, even squares and waves on this newly revealed one: very unusual. Theories abound, of course: sun, moon, stars, maps, calendars – I’m sure someone has suggested they are flying saucers! We’ve written more on this in previous posts, and of the prolific appearance of rock carvings on the whole Atlantic facing coast from Scandinavia down through Scotland, Britain, Ireland, Brittany, Spain and Portugal. There are variations but the same symbols or motifs occur over and over. But here – on our doorstep – are some of the most unusual shapes to challenge our imaginations.

I have been extending my researches to petroglyph cultures beyond our own roots. I was intrigued to find some images from New Mexico – strikingly similar to our rock art – and Hawaii. In the latter place there are numerous circular depressions, around 50mm in diameter, interspersed with lines and circles. On our rocks in West Cork cup marks are also widespread – one of the most common images. They are also surrounded by concentric circles: at Derreennaclogh there is one cup mark with eight concentric circles around it – that’s more than we’ve seen on any other site.

There is folklore attached to the Hawaiian cup marks: local historians explain that these holes are called ‘Puka’. When a child was born a Puka would be carved in the lava stone. The new baby’s ‘Piko’ – umbilical cord – would be placed in the Puka to wish blessings upon the child for a long and prosperous life. In Hawaii and New Mexico the carvings are reckoned to be between 500 and 1,000 years old – much younger than our Rock Art. But here’s more food for thought: in Irish there’s also a word ‘Púka’ or ‘Pooka’ – sometimes a Fairy, or a shapeshifting spirit which can appear as a Hare or a Horse with dark fur. If a human can jump on the back of the Horse he will be given a wild ride but will probably be thrown off. Legend says that Brian Boru – the High King of Ireland – was the only man who could truly ride the Púka – by using a bridle incorporating three hairs of the Púka’s tail.